Modern marketing: think outside the box

If everyone is thinking alike, then somebody isn’t thinking.” George S. Patton

Ancient Sparta had two kings. If one fell in battle or became incapacitated, the country would never be without a ruler. This made Sparta tremendously stable and absolutely confident in times of war.

This one idea was so simple and solved so much, but was never repeated by any other Greek city-state (or any nation since, that I know of).

This was “thinking outside the box.”

Many people’s thinking is trapped within the confines of what’s easy, what’s comfortable, what’s typical. This is called thinking inside the box. Or, being “normal.”

Thinking beyond the norm 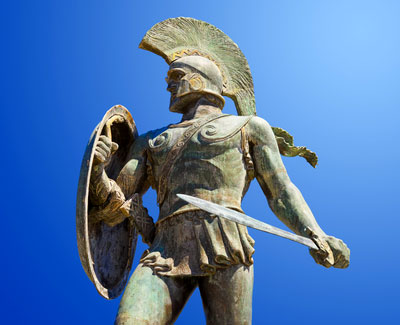 Let’s take the example of the Spartan kings. You can apply that same idea in business: Do you have someone working for you that you absolutely rely on?  What would be the result on your business if something happened to that person? The way to avoid catastrophe is just think ahead. Come up with a way to continue operations no matter what happens.

As another example, if you are running a marketing campaign that is producing a certain amount of success you may consider running a public relations campaign as well to boost overall results.  In my marketing agency, we have some clients who were very happy to get a good chunk of their business from customer reviews on Yelp.

Since they weren’t paying for it, their thinking went, why should they spend anything on marketing? Typical small business thinking.  Well, the answer became abundantly clear the following year when they got some bad reviews and their new business leads dropped considerably. Suddenly, they came to us screaming for help for an urgent solution.

A more modern example of thinking outside the box is the automotive company Tesla, founded by entrepreneur Elon Musk. Tesla is a luxury automotive brand featuring totally electric cars.  According to a USA Today article from last August, “The swoopy electric sedan outsold all models from other luxury brands – Porsche, Volvo, Lincoln, Land Rover and Jaguar…With 4,714 new Teslas registered over the six months, it even topped some established conventional luxury models like Lexus GS at 2,298, and Audi A6 at 1,619.”

All its competitors were traditional gas-burning cars and established brands. Tesla was a brand-new-no-one-heard-about-before brand featuring “risky” technology: all-electric cars.  Land Rover, for example, was founded in 1948.  Jaguar was 1922. Lincoln was founded in 1917.

When was Tesla founded? 2003. Yet it is now dominating the market with a totally revolutionary product. This is thinking outside the box.

Are you selling furniture?  Offer potential buyers free furniture polish if they buy from you.

Does everyone in your industry get their business from trade shows?  Start doing webinars.  Bring the show to them.

Are your competitors lagging in technology?  Create a valuable smartphone app and offer it at no cost.

Analyze your competition.  Businesses in the same industry tend to do the same type of advertising.  Do something different.  Look at other industries–what are they doing that works?

I’ve noticed, for example, that all restaurants tend to distribute copies of their menu to houses and businesses in their surroundings.  I would do this, if I were running a restaurant.  But I would also distribute fliers with the special of the week.  A single offer on one flier.  Very few restaurants do this.

Is everyone in your industry promoting increased profits?  Promote decreased costs.  It’s essentially the same thing but from an opposite angle.

Survey your clients, past and current.  Why did they buy from you?   Do you have testimonials?  Look for common elements and promote those benefits.  This is a type of survey.  In my experience less than 5% of businesses ever do surveys.

Tell your personal story and use it to build your brand.  Be memorable, very few of your competitors will be!

This stuff doesn’t have to be complicated.  Something simple will suffice.

Once I was headed to Los Angeles for a conference and found out at the last minute that the state legislature was looking at passing a bill into law that would have been of benefit to my clients.

Opposition was apparently significant and it looked like the bill was going to get killed. I was literally getting on a plane the next morning and had to get ready.  The only option was to do something that would be potentially effective and yet take little time.  So I pulled up a personal story of a victim I knew about and, in one draft, put together an email to the legislature off the top of my head explaining why the bill was a great idea and why it had to become law.

Despite millions having been spent to kill it, the billed passed into law and today that state is the only one in the world that I know of which has such a law on the books.

It is important to have a plan. Spend time working on one. It’s imperative. Most of your competitors won’t even have a plan!

One technique I use often is to draw things out.  If I’m in a situation, I draw it out.  This way I visualize all the elements involved and can “see the box.”  I have a marker board in my office just for that purpose.

I remember a time when I got a call from an advertising agency that needed help closing a deal.  They were pitching an advertising contract for a large shopping mall and, because it was significant, major agencies had arrived on the scene and were working on some major pitches themselves.

Using large sheets of paper I drew out all the players: the client, the competing agencies and what their strengths and weaknesses were.  I also drew out a flowchart of the typical ad agency pitch process.  It soon became apparent that there were weaknesses we could exploit.  One of these in particular was something no one else was doing, or likely to do.  It just jumped off the page!

I was so confident that I discounted my services by half with the remainder due only if the agency won the contract.  They won and I was handsomely paid.

Remember, if you want the same result as everyone else, think the same way they do. If you want to rise above—if you want to do something different—you have to think outside the box.